The Doors Albums Ranked By Sales

MOTORHEAD sold over 708,212 albums, including 620,000 in the United Kingdom. The best-selling album by MOTORHEAD is NO SLEEP `TIL HAMMERSMITH, which sold over 110,000 copies.

The Beatles Albums Ranked By Sales

U2 Albums Ranked By Sales

The following is a page of the highest-grossing Christmas-themed films.

The following are lists of highest-grossing Greek films screened at cinemas in Greece and globally. The commercial course of Greek cinema changed during the times. The more successful periods are the period of 1950s and 1960s, often called the golden age of Greek cinema, and the recent 2000s.

Biggest worldwide openings for an animated film since 2002

This list charts animated films that had openings in excess of $100 million worldwide. Since animated films do not open on Fridays in many markets, the 'opening' is taken to be the gross between the first day of release and the first Sunday. Figures prior to the year 2002 are not available.

This list charts films the 50 biggest worldwide openings. Since films do not open on Fridays in many markets, the 'opening' is taken to be the gross between the first day of release and the first Sunday following the movie's release. Figures prior to the year 2002 are not available. 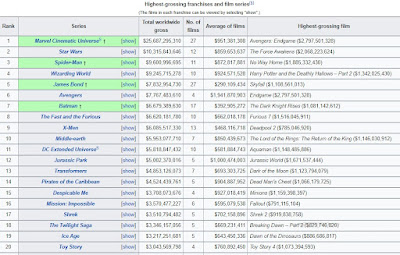 Prior to 2000, only seven film series had grossed over $1 billion at the box office: James Bond, Star Wars, Indiana Jones, Rocky, Batman, Jurassic Park, and Star Trek. Since the turn of the century that number has increased to over seventy (not including one-off hits such as Avatar, Titanic, and Zootopia). This is partly due to inflation and market growth, but also due to Hollywood's adoption of the franchise model: films that have built-in brand recognition, such as being based on a well-known literary source or an established character. The methodology is based on the concept that films associated with things audiences are already familiar with can be more effectively marketed to them, and as such are known as "pre-sold" films within the industry.
Read more »
No comments:
Labels: Cinema, Highest-Grossing

At least eleven films have held the record of "highest-grossing film" since The Birth of a Nation assumed the top spot in 1915. Both The Birth of a Nation and Gone with the Wind spent twenty-five consecutive years apiece as the highest-grosser, with films directed by Steven Spielberg and James Cameron holding the record on three occasions each. Spielberg became the first director to break his own record when Jurassic Park overtook E.T., and Cameron emulated the feat when Avatar broke the record set by Titanic. When it took over the top spot in 2019, Avengers: Endgame became the first sequel to hold the record of highest-grossing film, and in doing so ended thirty-six years of Spielberg/Cameron dominance before Avatar reclaimed the top spot two years later in 2021.

Highest-Grossing films by year of release 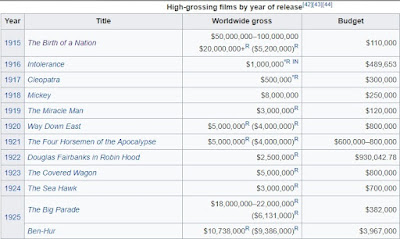 Films generate income from several revenue streams, including theatrical exhibition, home video, television broadcast rights, and merchandising. However, theatrical box office earnings are the primary metric for trade publications in assessing the success of a film, mostly because of the availability of the data compared to sales figures for home video and broadcast rights, but also because of historical practice. Included on the list are charts of the top box-office earners (ranked by both the nominal and real value of their revenue), a chart of high-grossing films by calendar year, a timeline showing the transition of the highest-grossing film record, and a chart of the highest-grossing film franchises and series. All charts are ranked by international theatrical box-office performance where possible, excluding income derived from home video, broadcasting rights, and merchandise.
Read more »
No comments:
Labels: Cinema, Highest-Grossing

With a worldwide box-office gross of over $2.8 billion, Avatar is proclaimed to be the "highest-grossing" film, but such claims usually refer to theatrical revenues only and don't take into account home video and television income, which can form a significant portion of a film's earnings. 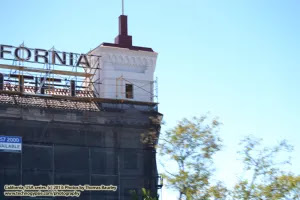 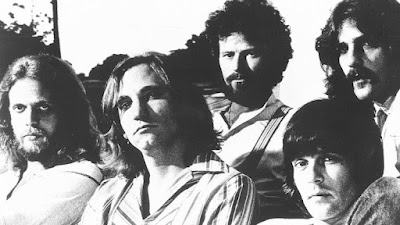 “On A Dark Desert Highway…”

It’s one of the most interpreted songs in the history of rock n’ roll. That’s right, we’re talking about The Eagles’ classic “Hotel California”. Many people have argued, debated and researched what the true meaning behind this song actually is. Truth be told, it could be interpreted in a number of ways. A common belief is that the song is about purgatory, referring to the line “this could be heaven, or this could be hell.” Don’t get us wrong; this interpretation is completely understandable and valid, but members of the Eagles have spoken up and revealed the actual meaning behind the famous lyrics.

Hotel California by the Eagles: What was it actually about? 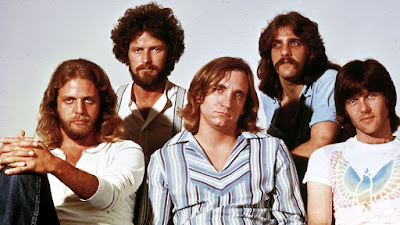 Michael Jackson's Thriller has been overtaken as the all-time best-selling album in the US by the Eagles' greatest hits, and that band's album Hotel California is at number three. What is the spooky title track all about, asks Alan Connor.
Read more »
No comments:
Labels: Eagles, Music, Rock

It has now been more than 40 years since the Recording Industry Association of America started handing out awards for million-selling LPs. Which makes this a good time to count down the biggest selling classic rock albums of all time.